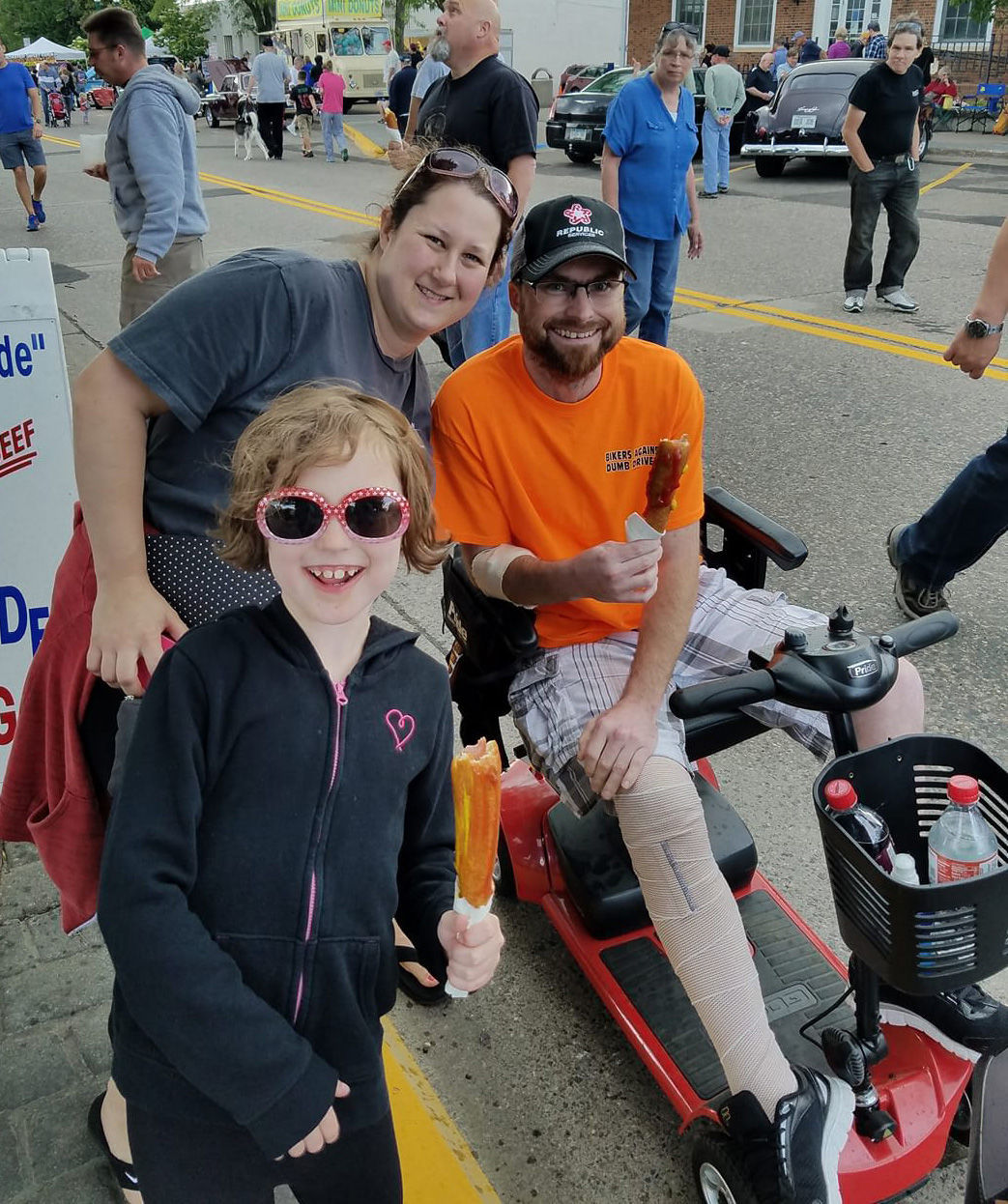 A benefit is planned next weekend for a Shakopee garbage man whose life was changed when he was hit outside his North St. Paul home by a motorcyclist who fled the scene.

Jason Hanna was struck by the motorcycle one evening in April as he tried to flag down the driver to slow down. Hanna underwent an emergency eight-hour surgery after the incident, and that was just the first of several surgeries to come throughout spring and summer.

According to his wife, Jenny Hanna, he suffered two broken legs and a severed artery in the back of his knee. Jason was lucky not to sustain any brain damage, Jenny said.

Jason is recovering, but he has not been able to return to work driving routes in Shakopee for Republic Services.

“It’s been a long road. It’s been a rough recovery,” Jenny said. “Right now they’re holding off on knee reconstruction. They have to (wait) until they get the plates out of his knee, but they don’t even know if they’ll have to do that.”

The long road has been winding. Along the way, Jason has encountered multiple surgeries, a staph infection that set back his recovery by six weeks and lots of physical therapy. He has also had some victories, though, like when he was given the go-ahead to walk again in July.

“He pretty much had to relearn how to walk because the muscles are so tight in there they just don’t want to move. But he’s doing well,” Jenny said. “We’re just trying to get him back on his feet and get him back to work here in the next six months maybe. We have no idea how long it will be.”

While Jason is off work and focusing on recovery, Jenny has still been working as a medical assistant. She is busy managing the family’s schedules and appointments, but she’s holding in there.

The silver lining is that the couple’s 8-year-old daughter Amelia got to spend some quality time with her dad over the summer.

“Amelia has done really well,” Jenny said. “She loves to play video games, and dad was pretty much stuck to the couch with video games all summer.”

The benefit is set for 1 to 5 p.m. Saturday, Oct. 7 at the Dog House Bar and Grill in Maplewood. There will be a taco bar, bake sale, raffles and a silent auction. Attendees can pay $20 for tacos and beer or $10 for tacos and soda. Children 10 and under are free.”We have some bigger prizes we’re doing, so we’ve got some good stuff. We have our top three prizes as a TV, $200 gift card and $100 in cash,” Jenny said.She is hoping for a big turnout as their insurance coverage is still unknown because of the unusual circumstances.

“Due to this being a hit and run it is not certain what insurance will help cover at this point,” she said. “Everything is kind of up in the air right now.”