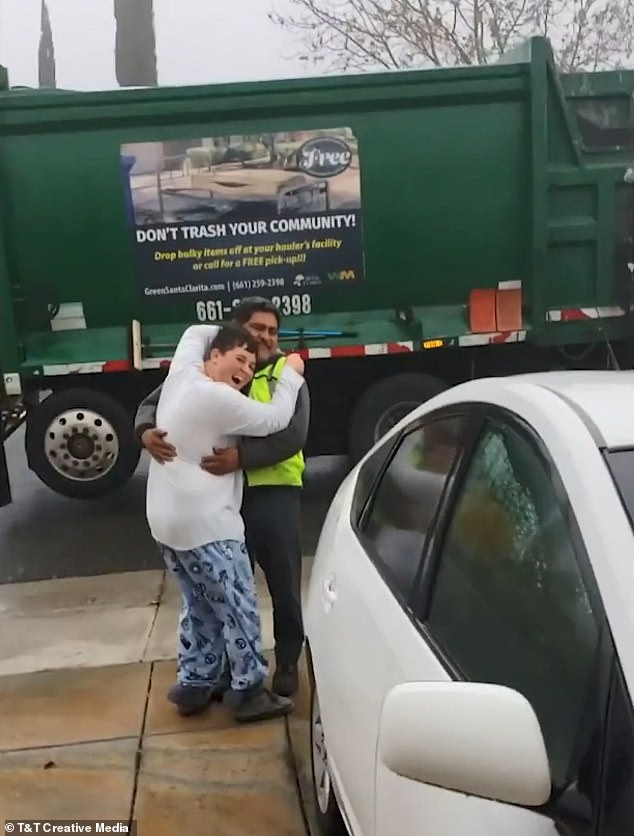 A little boy with special needs could not contain his excitement as his favorite garbage man and friend arrived at his home.

Jonathan Haselbusch loves seeing the garbage trucks so much that his mother Christina takes him to the waste management yards to look at them.

And last year he dressed as a garbage man for Halloween in their neighborhood in Canyon Country, California.

The adorable youngster forged a special bond with one garbage man named Antonio who loves to see Jonathan just as much.

Footage shows Johnathan clap his hands in the hair and screech in excitement as he sees the large green garbage truck approaching his house.

The boy is standing in his front garden with his mother and it appears to be morning time as he is wearing slippers.

He then runs towards him while jumping up and down and give him a giant hug as he approaches the family’s driveway.

According to information posted with the footage, their bond began when Jonathan put pictures he drew on the trash cans for the garbage men.

One day Christina saw one Antonio took the picture and hung it up in his truck.

The first time he met Jonathan, there was an instant connection and the pair have been best friends ever since.