SHAKER HEIGHTS, Ohio — John “Derf” Backderf, known simply as “Derf” to all, has cornered the market on writing about things most of us don’t care to think about, such as his last graphic novel, “My Friend Dahmer,” and his comic strip, “The City.” 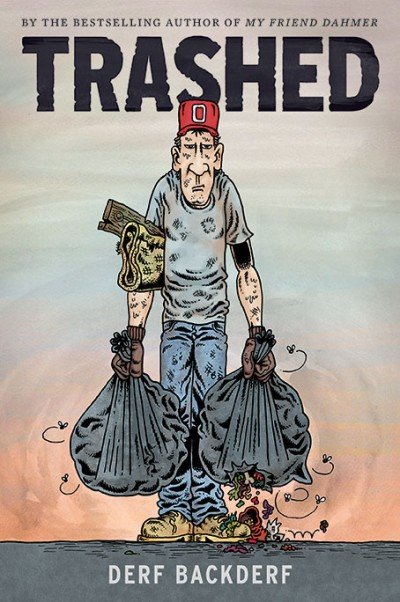 Derf’s latest work is another foray into a world that most of us ignore — the home sanitation service, more precisely, garbage collectors. Derf, of Shaker Heights, writes and draws his own material, using a distinctive artistic style that is immediately recognizable.

“Trashed” is a massive overhaul of a brief graphic novel of the same name he published more than a decade ago and follow-up webcomics. The new version (Abrams Comicarts, $24.95) is actually mostly a new work, with 250 new pages, and with some of the pages redrawn from the original and from subsequent webcomics.

The new book is just as much fun as the old, despite an effort to make the book smarter by including many fun facts and figures about waste production and the sanitation industry. The original, 50-page graphic novel was released in 2002 and written about a time in 1979-80, when the job of a trash collector was much more hands-on than now. Today, mechanized trucks do most of the heavy lifting.

The new version is set in a world where most trash and garbage collecting is done by hand by men usually not too thrilled with the work. It is loosely based on Derf’s time as a trashman — excuse me, sanitation engineer — for the Summit County village of Richfield.

“Trashed” is a book lovingly and laughingly dedicated to the poor people that have the unglamorous and often disgusting jobs that allow the rest of us to get on with our lives. The cover proclaims the book is “An ode to the crap job of all crap jobs,” and it lives up to the slogan. You’ll learn more about garbage, rotted animal carcasses and leaky trash bags of unmentionable substances than you ever wanted to know.

The book is an easy read and totally enjoyable. And if you’ll excuse the pun, it’s a perfect bathroom book.

It follows the adventures of Derf as he reluctantly takes a summer job riding the back of a garbage truck. It’s an Odyssey of conflicts, hassles and occasionally fun times he encountered with a bizarre cast of characters, which he says were created out of whole cloth but must be loosely based on people he knew back in the bad old days.

That includes the “Reichsmarschall” (sic), a neo-Nazi who was a perennial candidate for office in Richfield. He was not a favorite customer. Or Magee, a social rebel who is dragooned into service during a busy week.

More than anything else, the book is funny, very funny. At times, it’s a laugh-out-loud kind of funny rarely found in graphic novels.