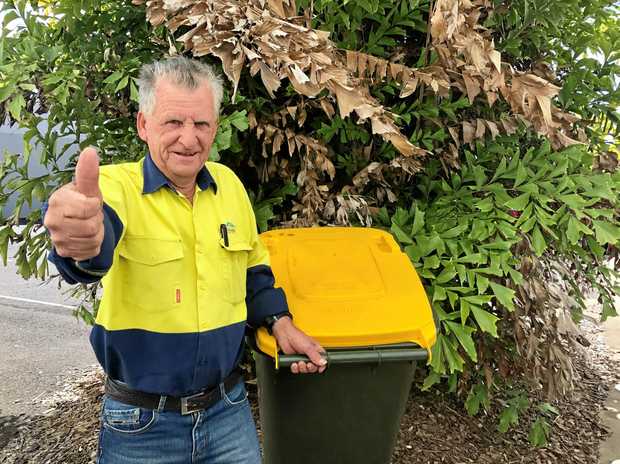 Some even get up at the crack of dawn as they hear Mr Maddern’s recycling truck rolling through the street, just to give him a wave.

That’s what the Bundaberg Regional Council truck driver said made his day that little bit brighter.

“There is a little boy, only about three years old, that waves to me every time I am in his street,” he said.

“I am there at about 5.40am every second Monday morning and his father told me that he couldn’t believe his son wakes up so early just to see me.

“There is another family who live over north who all come out to their front step to wave to me.”

“It just makes me feel so good.”

This Friday will be a bitter-sweet one for Mr Maddern, who will be retiring after over a decade of garbage collection throughout Bundaberg.

The news will be sad for a lot of Bundaberg families, who have actively voiced how much happiness the garbage truck man brings to their mornings.

“A big thank-you to the recycling truck driver who does Coral Cove, you make my grandson so happy, thanks so much for the beep and wave,” Cathy Parry commented in a recent NewsMail post.

The 65-year-old local man said his connection with children had come from surrounding himself with his own very large family.

“I have seven kids of my own, about 20 grand kids and six great grand kids,” he said.

“My whole life has been about kids.

“Retiring is ….well I don’t know how I will go. I am going to miss all of the kids and the families who have been so good to me.”

Mr Maddern’s niece, Neeascha Annastaisa Schafer, said he had always gone out of his way to make people happy.

“He would always pull the bins out for elderly couples and put them away, wave to kids and stop and have a chat,” she said.

“He loves the people he meets on his runs and would always bring home the most beautiful gifts from people.

“To anyone who had Wally as the man who emptied their bins thank you for always making him smile.”