After a tumultuous year that saw it become a target for the waste industry’s big players, Rubicon Global has emerged as tech’s first unicorn in trash.

The Atlanta-based startup has received a $50 million in a strategic investment from Mexican private equity firm Promecap to continue to expand in the U.S. market and eventually open operations in Mexico. The deal values Rubicon Global at more than $1 billion, according Nate Morris, the company’s cofounder and CEO.

“It’s been a challenging year, but we’ve had incredible highs,” Morris said in an interview. “Having a foreign entrant investing is another very strong signal that will continue to put pressure on the market.”

A software challenger that connects haulers with companies and municipalities who need their waste picked up, Rubicon Global has grown fast in the face of what Morris calls an oligopoly of public companies led by Waste Management, Republic Services and Waste Connections, which carry a market capitalization of more than $70 billion between the three of them. Though considerably smaller then that group, Rubicon took in more than $300 million in revenue in 2016, triple the year before, and is on pace to exceed that amount again in 2017. Rubicon now works with 5,000 customers, its CEO says, up from 1,500 a year ago.

Much of that growth has come among small businesses using Rubicon as something of an Uber for trash to find cheaper hauling rates and schedule pickups on a frequency more on par with their waste accumulation. That segment of business is growing at a 300% clip, says Morris.

Founded nine years ago by Morris and a childhood friend in Louisville, Rubicon caught the eye of investors including Salesforce CEO Marc Benioff and Uber founding CTO Oscar Salazar, as well as Goldman Sachs and Wellington Management. In January, the company announced a $50 million investment by French multinational Suez Environment that valued the company at $800 million. 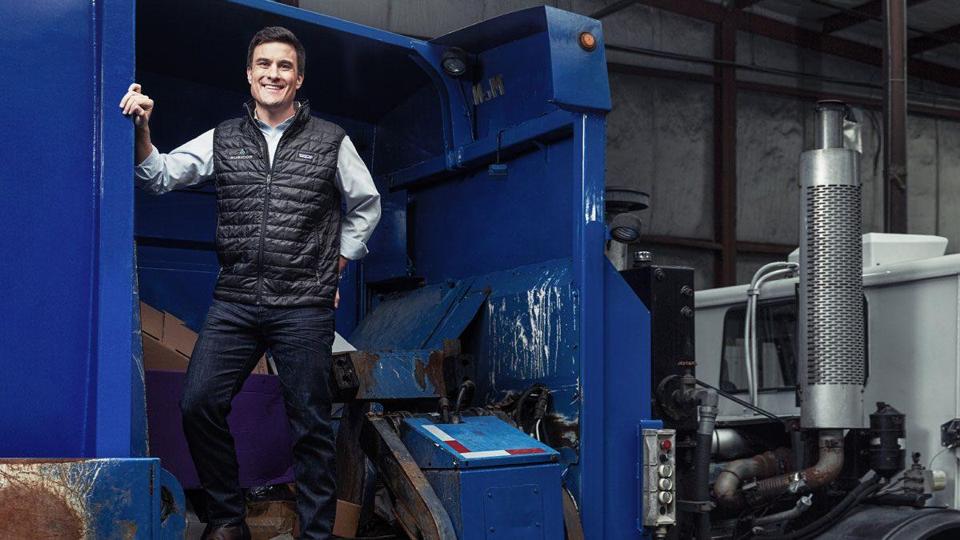 While Rubicon’s new investment is at a higher price tag than its last, the new funding comes after Rubicon has had to undergo some painful changes. Rubicon replaced its CFO in June, bringing in an SAP veteran in Chad Gold less than two years after its previous hire for the role. Salazar joined the company’s board as the company undertook a major shift in how it achieved its SMB sales, moving from more traditional tactics to a digital approach that meant some layoffs at the Atlanta-based company. “We scaled very fast, when you go fast like that, you can make mistakes,” says Morris. “Rather than go down that course, we took a pause and course-corrected.” Rubicon’s digital SMB sales are now on pace to be half its business in Q1 of 2018, says Morris, up from 2% in Q1 of this year.

Rubicon is also looking to steer a path closer to profitability. Much of its revenue is still influenced by national accounts like Wegmans, which can run to up to $50 million in annual contract sizes. Rubicon recently signed one of the ten biggest such contracts in the U.S. with an undisclosed customer, Morris says.

As Rubicon Global keeps expanding, it’s faced increasing attention from the industry’s leaders this year including a spate of lawsuits. In one such suit, Waste Connections accused a former employee who’d moved to Rubicon of downloading thousands of pages of proprietary documents before making the switch. Rubicon terminated the employee in July. In others, Rubicon has been accused of wrongfully towing containers of its competitors away from properties after the businesses there switched to Rubicon.

Rubicon won a legal victory in Shreveport, Louisiana that set a timeline of 14 days for such removals, says Morris. The challenges stem from what Morris says is a popular tactic among the big waste companies of leaving their dumpsters at erstwhile clients’ properties indefinitely, creating a logistical and space headache that helps make them return into the fold. Rubicon would send notices that the business had shifted to them to no avail, says its CEO. “If you’re serious about disruption, it always comes with a price,” Morris says.

At the trash industry’s annual WasteExpo event, Rubicon also found itself in the crosshairs of the big players – now invited onto panels with them, it took shots such as from Waste Connections CEO Ron Mittelstaedt, who took issue with the notion that Rubicon’s model is more environmentally friendly or fundamentally different from the pack: “There’s nothing unique about anything Rubicon or any other broker is doing in regards to sustainability,” he said in May.

The startup’s policy and strategic initiatives chief Michael Allegretti, an Uber veteran who bore the brunt of those attacks, says Rubicon has worked with a national non-profit organization to help customer achieve zero net waste while continuing to pilot programs with cities such as Atlanta, whose experiment with Rubicon recently came to a close. Rubicon has since launched pilots with Columbus, Georgia and Santa Fe, New Mexico, which run until mid-November and mid-May. The company plans to be in 15 U.S. cities by year’s end.

The investment by Mexican firm Promecap represents a significant bet by the Chico family, among whose leaders includes a long-time associate of Carlos Slim’s, Fernando Chico Pardo. The Chico family has business interests in infrastructure and waste and performed extensive diligence on Rubicon, according to Chico, Promecap’s chairman and CEO. “Rubicon has the vision for how the waste and recycling industry will evolve,” he says.

For Morris, the funding caps what has been a transitional few months. “What I tell everybody daily is, we are hungry than ever,” Morris says. “We have to recognize the challenges we’ve had, because we’ve had a lot. And now it’s all about execution.”